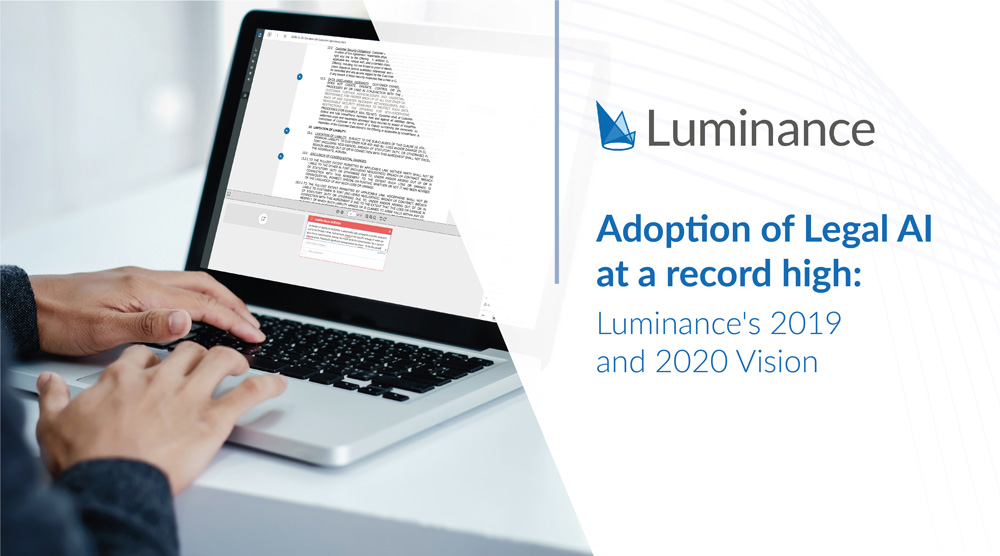 The legal sector has historically been a slow adopter of technology. However, in a fast-moving and complex legal climate, faced with global interconnectedness, increased market volatility, as well as competition and consumer demands, legal AI has emerged as a very necessary legal tool. With Brexit looming, a new generation of tech-savvy lawyers, as well as the increased pressure for legal services to ‘innovate’, the legal tech revolution is well underway. 2019 is only the beginning.

In fact, annual investment in legal AI hit £1billion in 2019. It is therefore not surprising that this year Luminance welcomed all of the ‘Big Four’ as customers, as well as advisors from both top-tier law firms and challenger firms. Key to this, is that legal AI is not just for the 15% of lawyers who, according to an ABA survey, practice in the largest of law firms. Luminance offers advisors from organisations of all shapes and sizes a sophisticated tool to accelerate legal processes. The ‘equalising’ effect of legal technology is something that is predicted to hit legal services in 2020, making the legal sector more of a level playing field.

Leveraging a tool which can meet these industry demands is pivotal. That is why, later this year, Luminance announced the creation of an Advisory Board. Comprising four world-leading lawyers, Rosemary Martin, Group General Counsel of Vodaphone, Steve Cooke, Senior Partner at Slaughter and May, Manuela Cavallo, Founding Partner of Portolano Cavallo and Vagn Thorup, Former Chairman of IBA, their expertise will be invaluable as adoption of legal technology continues to soar for both law firms and in-house legal teams.

Since its inception, Luminance has fast-established itself as the world market leader for legal AI solutions. The platform’s unique blend of both supervised and unsupervised machine learning leapfrogs existing technologies, providing advisors with time-savings of at least 50% on day one of review by immediately reading and understanding huge volumes of complex data. As a result, advisors are able to review 100% of the documents, spending less time on the drudge work, and more time on meaningful analysis.

The multiplying effect of the technology is well-documented, allowing lawyers to do more work in less time, and with less resources. This is well demonstrated by the top-tier law firm Bird & Bird, who used Luminance earlier this year to conduct a due diligence review of almost 20,000 contracts. The legal team estimated that, in the same time it would have taken to review the whole project manually, they could have completed 50 projects in Luminance. Results like these bring new possibilities for lawyers, now and in the future, such as, more flexible, agile working practices, a better work/life balance, and even the end of the ‘billable hour’ dominant in many legal institutions.

Whilst the demand for legal technology remains strong for British law firms, with CBRE estimating that 48% of London’s law firms are using AI, in 2019, Luminance welcomed our first Greek customer, our first Japanese customer and increased our presence in the US. Indeed, in August this year Luminance’s President of Americas, Jason Brennan, joined the company to head up Luminance’s expansion into the Americas. Whilst the so-called ‘network effect’ of adoption has largely been contained within Europe so far, Luminance’s global expansion goes to show that new players are adopting, using and thriving from the technology.

With 40% of our customers now using Luminance to work in predominantly non-English languages, the unique flexibility of the technology is making waves in the legal industry. This year saw our customers successfully using the technology in over 80 languages around the world showing how LITE empowers advisors to work seamlessly across a multilingual data room, no training or configuration required. Most recently, Luminance was used to conduct document review in Serbian.

In recognition of Luminance’s success, the company has been awarded a number of prestigious accolades, including being selected as a Technology Pioneer by the World Economic Forum and being handpicked for both CNBC’s ‘Upstart 100’ list and the Queen’s Award for Innovation. For a company that celebrated their three-year birthday in September, this is no easy feat.

Deloitte predicts 2020 to be the ‘tipping point’ for the legal industry, with legal technology at the core of this. Deploying the right technology is a key a part of this- empowering lawyers to cut through the admin work, get to the crunch of the deal, without ever relinquishing control to a machine.