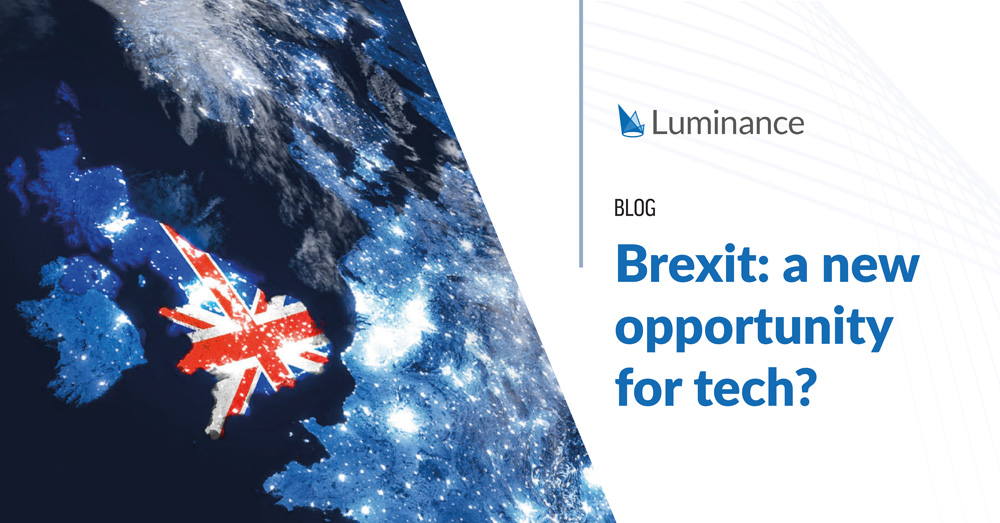 Brexit: a new opportunity for tech?

It is now a week since the United Kingdom officially left the European Union. As we head into a post-Brexit Britain, question marks loom over the future of the country. But whilst change brings an inevitable degree of uncertainty, it also creates opportunity; the chance to do something new and different. With investment in the UK tech sector reaching a record £1bn in 2019, platforms like Luminance emerge as the perfect technological ally for law firms navigating an unpredictable and challenging climate.

Looking at the current state of affairs, it is safe to say that the UK’s route out of the European Union is not going to be an easy one. The next few years will call upon government to negotiate and handle major reforms; managing economic and political uncertainty whilst at the same time maintaining business as usual.

On the other hand, Tech Nation’s recent stats show that in 2019, venture capital investment in UK tech companies increased by 44%, positioning the UK as the frontrunner in tech innovation for Europe. This level of investment outperforms even the US and China! In fact, a study by KPMG found that in the aftermath of the Brexit referendum, the UK tech sector has continued to go from strength to strength with robust earnings, growth and strong cash flows. The knock-on effect of this is that wages in the tech sector remain high, and job growth is still outperforming other sectors of the British economy.

Of course, there are very legitimate concerns about Britain’s fate which cannot be overlooked. The predicted restrictions on freedom of movement have the potential to reduce inward flow of tech talent and disrupt overall productivity. Moreover, the UK’s future trade deal might make or break growth and investment in UK tech.

Nonetheless, according to a poll of 100 UK tech start-ups conducted by Studio Graphene, 75% of respondents felt confident in their ability to grow over the next 12 months. It therefore could also be said that Brexit may present itself as an opportunity for those wanting to enter the tech sector, using Brexit as a means of advancing their careers as a consequence of new vacancy openings.

Brexit also presents opportunities for companies to showcase technologies that can increase the efficiency of their most qualified and valued employees. For example, with potential restrictions on free movement of people, labour-saving technologies like Luminance are vital for the continuation of productivity. Luminance’s ground-breaking machine learning technology, ‘LITE’ (Legal Inference Transformation Engine), adopts flexible pattern-learning algorithms to read and analyse any document set, in any language and in any jurisdiction. Further, by utilising machine learning, Luminance can assist lawyers when they commonly deal with vast corpuses of documentation. LITE can, for example, read and flag Change of Control clauses (in any language) or automatically understand and tag conceptually similar documentation. Using Luminance, lawyers are freed from the more mundane, low-level tasks and empowered to redirect their focus towards the more complex tasks that maximise their training and experience.

Certainly, following Britain’s departure from the European Union, significant legal and regulatory overhaul is hotly awaited by law firms. Indeed, the re-drafting of legislation and the impact of leaving a single market on UK and EU business contracts will further increase the lawyers’ workload. Lawyers must keep up with the fast pace of change and adapt to the needs of their clients by repapering contracts where necessary. Implementing a solution which is flexible enough to adapt to a changing legal landscape is crucial. By adopting flexible machine learning algorithms, Luminance’s LITE can instantly surface all potential risk and analyse this in accordance with regulatory change. The platform then continually learns from its interactions with the advisor to refine the repapering process as new challenges arise.

The future of UK Tech

It is clear that the UK tech industry has shown real promise in the face of political and economic turbulence. Cutting-edge technology platforms like Luminance are invaluable for firms, not only for boosting overall productivity and growth, but also to stay abreast of a changing, post-Brexit marketplace. Therefore, we can expect that the momentum of the tech industry not going to plateau any time soon.