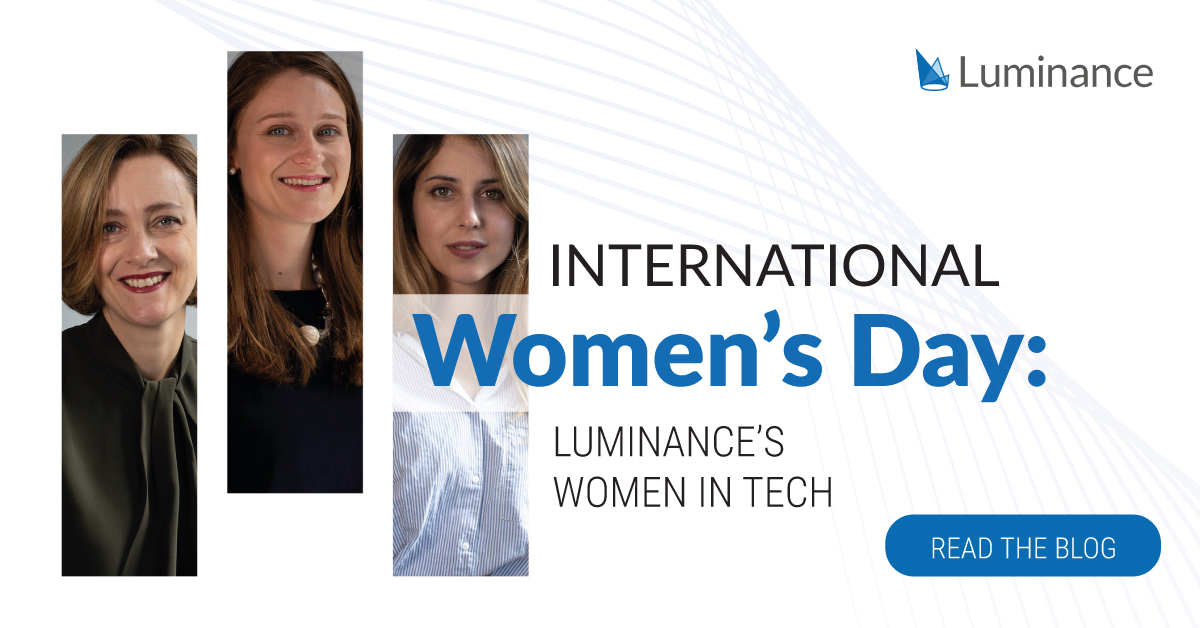 This week marks the 111th anniversary of International Women’s Day, an occasion to recognise and celebrate the achievements of women globally. With many of Luminance’s top executive positions being held by women, Luminance’s world-leading machine learning is not the only thing which sets us apart. Whilst just 22% of all technology professionals are female, Luminance defies industry standards with an executive team which is almost 70% female.

In this post, we speak to a few of the leading women of Luminance about their experiences at the helm of a tech company which is revolutionising the legal industry.

Recently named ‘Business Woman of the Year’ by CEO Today, Luminance’s CEO Emily Foges is a notable spokeswoman for female representation in tech. ‘It has never occurred to me that my gender should define my career path or restrict my opportunities in any way,’ Emily commented. As a mother of 3 daughters, Emily is particularly passionate about ensuring that this ethos ‘is embedded right from the start,’ with education key to changing gender imbalances in certain industries. ‘There is worrying evidence that a high proportion of girls decide far too early that STEM subjects are ‘not for them’, and drop maths and all sciences after GCSE despite performing well in these subjects. A lack of confidence in using and understanding the language of maths and science can significantly impact on career prospects and future earning potential. Girls should be encouraged to consider continuing STEM subjects into college and university, standing them in good stead for exploring career paths with more potential for progression.’ With Emily as CEO, it is no surprise that the Luminance workforce includes a high proportion of women – from the marketing team through to one of our leading software developers, Catherine Bowden, who has a key role in developing Luminance’s pattern-matching algorithms.

At times, being a woman in a male-dominated industry can pose its difficulties. Luminance’s Sales Director, Jaeger Glucina, has personal experience with this. ‘Sometimes when I walk into a meeting or a presentation as a ‘youngish’ woman I am met with sceptical glances which is obviously frustrating. But I don’t let that intimidate me…I actually prefer to enter the room as an underdog and leave the meeting having really made an impact and a lasting impression.”

It is the tenacity and leadership of these individuals, amongst many others, that has facilitated Luminance’s astonishing growth, becoming a market leader in just under 4 years. Luminance is a company ‘where gender is not relevant to your success … our leadership is authentic to our strengths’ states Clementine Fox, Head of Account Management. With experience working in law firms prior to joining Luminance 3 years ago, Clementine is not only proud to be leveraging AI to reshape the legal industry but also to ‘demonstrate a change in this still male-dominated space.’

Gaining over 215 clients in 47 countries worldwide in under 4 years, Luminance’s women in tech have made a real impact on the legal industry, something the AI company is celebrating on this International Women’s Day.