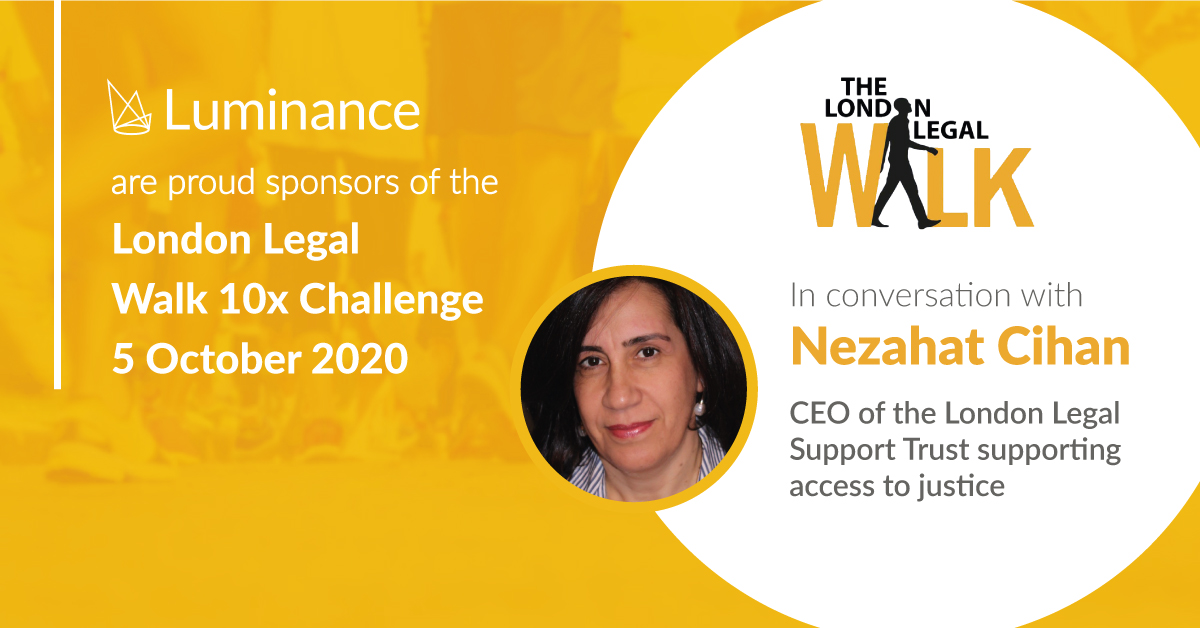 Luminance recently spoke with Nezahat Cihan, CEO of London Legal Support Trust (LLST), an organisation that raises funds to provide free legal services in London and South East to those in need. LLST raises money mainly through sponsored events, most notably, the London Legal Walk of which Luminance is a proud sponsor.

Luminance: What are the main challenges with regards to access to justice in the UK?

Nezahat: Access to justice is a cornerstone of justice in the UK, but in reality, not everyone can afford to pay for a lawyer when they need legal advice. The introduction of the Legal Aid, Sentencing and Punishment of Offenders Act 2012 (LASPO) damaged the functioning of the justice system. Many areas of law were removed from the scope of legal aid and what remained within the scope, such as housing and asylum, was very restricted. As a result of this, many legal aid firms closed down, but demand for legal services has increased signifcantly. There were 870 legal aid firms in 2012-13, but only 95 remained in 2013-14, a fall of 90%.

Luminance: How has access to justice been impacted by Covid-19?

Nezahat: The pandemic has had an impact on everyone’s lives, but some sections of our communities have been affected more than others. These include the elderly, homeless people, people with disabilities, refugees and migrants, those who have been on furlough or who have no job security, low paid self-employed people and many more. Agencies have reported a six-fold increase in the need for help with one agency currently receiving up to 450 calls for advice per day. These agencies were already operating on a shoestring budget before COVID-19 due to cuts in both legal aid and local and central government funding. The viability of the legal advice agencies is also under threat as many of them have not been able to raise any income from their legal aid contracts or hold their annual fundraising events.

Luminance: Do you think AI technology can help to improve access to justice?

Nezahat: The potential for legal tech and AI in contributing to fair access to justice is huge. Legal tech could assist with triaging of clients, using basic logic to help answer simple queries and signpost to resources or more tailored support, which undoubtedly saves time. Legal tech may also make advice and legal support more widely available to more of the population, especially those in remote areas or living in ‘advice deserts’.

Luminance: Is efficiency of document review and the delays in court hearings a concern for Access to Justice?

Nezahat: Timely resolution of legal matters is vital to ensure that individuals can fairly access justice, but people have their lives on hold whilst waiting for hearings. Court closures have exacerbated delays and lead to increasingly far-fetched scheduling, with some current cases being listed for 2023. If justice is not enforceable or accessible, it may as well exist as an abstract idea rather than the living, tangible pillar of civilisation that it is intended to be.

Why is it important to have Luminance’s support?

Nezahat: London Legal Walk relies on sponsorship income as well as fundraising from individuals and corporates. Being sponsored by a credible company such as Luminance which works with lawyers from over 250 firms gives us exposure to wider legal sector.