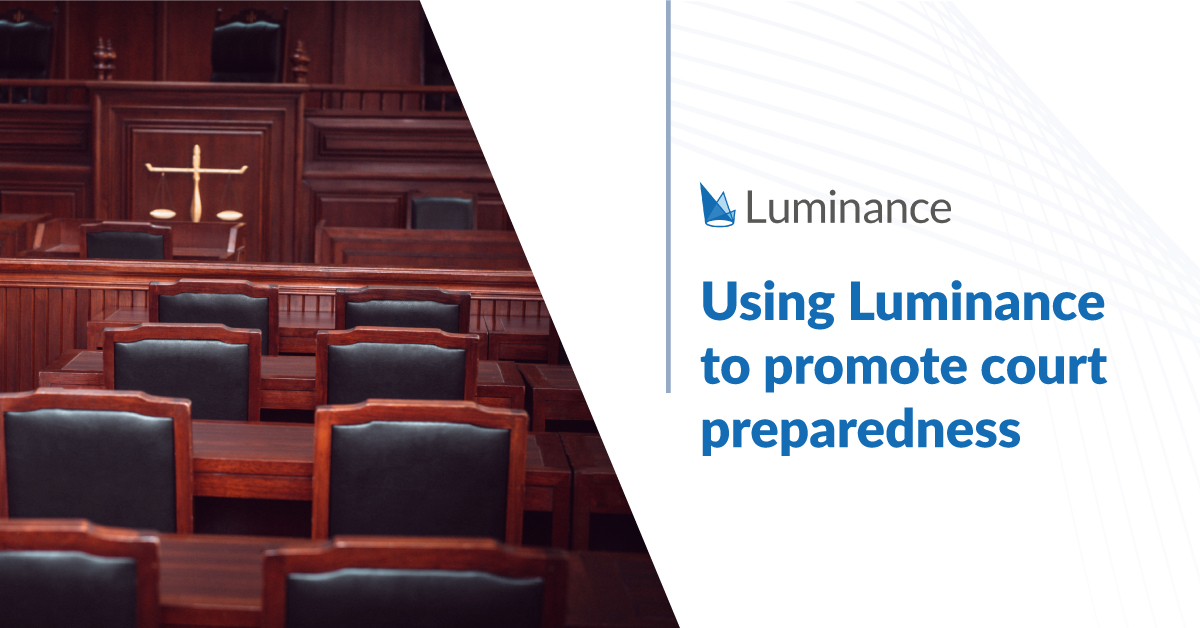 Last week, Luminance sat down with Tom Parker, Barrister at London-based Chambers, The 36 Group, to discuss how the practice has adopted Luminance’s Discovery platform to prepare for an ongoing high-profile murder trial, the struggles of remote court hearings and the ‘inequality of arms’ for criminal defence counsel.

When looking back at his overall experience of conducting court-based litigation during the pandemic, Tom described the experience as necessary in terms of forcing the courts to “get with the times in a real, positive way”. For instance, technology has been key in facilitating remote working, and Tom went on to describe his experience of using Luminance to assist in the preparation of court documents as invaluable to maintaining productivity and promoting better ways of working. Tom explained that “previously we would have printed off thousands of documents which also had to be couriered - but this shouldn’t have to be the case.” In fact, The 36 Group have been using Luminance’s powerful technology to securely access their documents when working from home. Rapidly deployed via the cloud, Luminance allows lawyers to easily and securely access their documents from any location. This proved invaluable for Tom and his team who recently needed to analyse and access 10,000 documents for an upcoming murder investigation. Further, the platform’s powerful collaboration tools, such as the ability to allocate tasks, report findings and track work progression was crucial in ensuring there was no duplication of work across the large team.

Practical benefits aside, Tom also noted that using Luminance, his team were able to “narrow down and figure out metadata in a secure and practical way”. Indeed, by combining both supervised and unsupervised machine learning, Luminance rapidly reads and forms an understand of the dataset, no matter how large. Luminance then highlights the results of its analysis on a visual, graphic display, enabling lawyers to quickly see what is important. By using Luminance’s powerful data culling and filtering functions, users are then able to quickly surface key information. Further, Luminance’s machine learning understands documents at a conceptual level, meaning that as the reviewer interacts with Luminance, the platform can proactively surface similar documents, predict and flag discrepancies in coding behaviour across reviewers, and show depth of review across conceptually distinct areas of the data set.

The issue with remote courts

However, Tom was quick to point out that remote court hearings in particular will not work for everyone - beyond the obvious technical issues that can frequently arise with poor internet connections or cameras and microphones not working, “you can’t have a cyber-based solution for a witness’s live evidence [as this affects] the jury’s ability to watch them.” Indeed, the nuance required in many of these cases has been highlighted by a recent BBC article which found court hearings held remotely in lockdown disadvantaged vulnerable people and should not be used in the long term, particularly with “emotionally charged issues”.

Moving forward, one interesting question raised by Tom is whether the Legal Aid Agency will accept that it is going to have to fund legal tech tools in the preparation of cases for the defence. Tom explains that in many of the cases he has worked on, “serious fraud offices will have armies of lawyers and as much legal tech as they’d like.” In legal terms, he says we should strive for the ‘equality of arms’ which is the basic principle that it should be fair between the prosecution and defence as to who has resources. Ensuring access to legal tech tools that can transform efficiency, such as Luminance, are not reserved for only one side of a case will be vital in ensuring fairer, more balanced trials in the future.

The Covid-19 pandemic has turbocharged the legal industry’s approach to technology. As Tom notes, whilst previously, lawyers were coming from a very specialised field without any prior knowledge of technology beyond everyday exposure to things such as smartphones, technology is now inextricable to their daily work. As such, Tom concluded that “just as there was a point in time where the smartphone was new and something to be learned, we will look back at AI in a similar vein”.