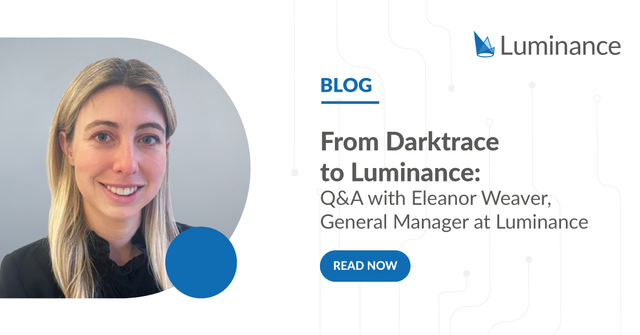 From Darktrace to Luminance: Q&A with Eleanor Weaver, General Manager

In this week’s blog, we chat to Luminance’s General Manager, Eleanor Weaver, who joined the company in 2021. Prior to joining Luminance, Eleanor worked at Darktrace, the world leading cyber AI company, where she spent six years as the Global Head of the Industrial Division and headed up Darktrace’s South African office.

Luminance: Eleanor, can you please tell me about your academic and career background?

Eleanor: After completing an undergraduate degree at the University of Exeter and a postgraduate degree in business at the University of Cape Town, I joined Darktrace in 2015. I worked in Darktrace’s UK office for a year and I then saw a lot of market opportunity in South Africa and ran Darktrace’s African division for two and a half years. After that, I headed up ‘Darktrace Industrial’ globally.

Luminance: Do you have a ‘career-defining’ moment?

Eleanor: Signing a multi-million deal in 48 hours! Another proud moment is heading up Darktrace’s Industrial product. When I joined the division, this was a product that didn’t have as much growth as it should have had. When I left, the product had achieved 112% year-on-year growth.

Luminance: Wow! Seriously impressive! So, why the switch from Darktrace to Luminance?

Eleanor: I witnessed Darktrace’s amazing growth, from early-stage start up to the world-leading cyber AI company it is today. I saw the opportunity to do that again at Luminance and it was an offer I couldn’t refuse. Luminance is at a really exciting stage and there is a huge amount of potential to build upon the momentum that it has already achieved.

Luminance: What excites you the most about Luminance?

Eleanor: What Luminance is doing in the legal profession is very interesting. The legal profession is at a point where they are starting to realise the potential for AI technology- AI is allowing lawyers to supercharge document review and Luminance is at the forefront of this. There is also a huge growth potential; Luminance’s powerful underlying technology means that it is not just for law firms but can actually be used within any business.

Luminance: What will you be responsible for at Luminance?

Eleanor: My main focus will be growing out the business. We have had a 40% increase in customers in 2020 and I want to continue onboarding new customers at this rate. In particular, I want to see corporate legal teams using Luminance more.

Luminance: Do you think that the legal industry is ripe for innovation?

Eleanor: Most definitely! I think that the narrative within the legal profession is changing and legaltech is no longer seen as a ‘luxury’ but a must-have. In the next two years, I believe that technology will no longer be at the fringes but implemented at the core of every business.

Luminance: Do you think Luminance faces any challenges?

Eleanor: I think that there is the continued ‘challenge’ of educating lawyers on how Luminance improves and builds upon existing practices. The Covid-19 crisis has also meant that budgets need to be spent wisely. However, I actually think that this provides an opportunity for Luminance because of the efficiency gains of using the technology.

Luminance: Thanks Eleanor! And finally, Luminance is very proud that 60% of its executive team are female. Can you tell me about your experience as a woman in the tech scene?

Eleanor: The tech world is increasingly waking up to the reality that technology is not just for men- the historic idea that there is a team of male coders sitting in a room is pre-dated. In fact, at Luminance, we have people like Poppy (Coy), our Discovery & Support Operations manager, Jaeger (Glucina), our Head of Sales and Priya (Bains), Luminance's Head of Product, and I think it is important to have inspiring female leaders who are open about what it means to be a woman in technology.

However, anyone that rises quickly will always face a lot of challenges- I remember in South Africa having a meeting and being asked when my boss was coming! The best way to counter experiences like that is to be confident in why you are sitting there. I also that think that whilst being a woman in the traditionally male-dominated industry presents its challenges, it can be a positive. For instance, understanding your EQ can really help in a business environment and in my experience, has been crucial to get a deal over the line or to bring a team together.