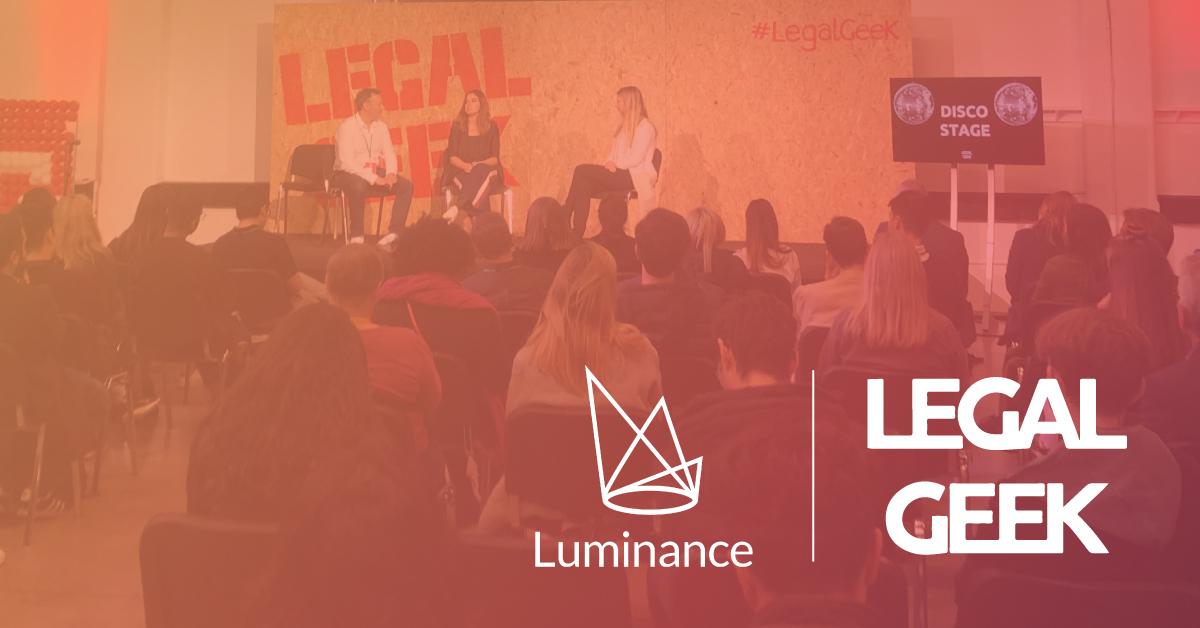 There was an electrifying atmosphere at last week’s Legal Geek conference, as the flagship event made its return to London and legal professionals from across the industry finally reconnected in-person.

This excitement was also, in part, due to the collective recognition that a true technological revolution has taken place within the legal industry over the last year. In the face of unprecedented global and regulatory change, technology has ultimately emerged as the key tool that will drive the legal profession into the next decade and beyond.

A highlight of the two-day conference was a discussion between Eleanor Weaver, CEO of Luminance, Jason Saiban, Partner at Top 50 UK law firm, Charles Russell Speechlys, and Holly Dickson, Head of Legal at fashion retailer, Farfetch, on the deployment of Luminance’s pioneering AI to tackle a Brexit-related review.

Holly opened the discussion by explaining that Farfetch’s in-house legal team had over 6,000 contracts on a shared storage system that needed to be reviewed in light of Brexit. With only a small legal team at the time, Farfetch reached out to their advisors, Charles Russell Speechlys (CRS), to put together a report on the contracts.

Faced with a specialist review of such scale and complexity, CRS decided to deploy Luminance. The legal team was unaware of which clauses within the contracts were going to be affected by Brexit and this is precisely where Luminance’s unrivalled machine learning capabilities came into play. Since Luminance does not rely on machine pre-training and rules-based programming, it holds the unique ability to surface the ‘unknown unknowns’ – flagging anomalies and potential risks that CRS and Farfetch suspected might be present but did not know where.

Following document upload, Luminance’s machine learning rapidly identified the key features of each contract. This allowed CRS to understand which contracts might be affected by regulatory changes following Brexit, thereby reducing the dataset to a manageable size for CRS’s legal team to review and saving an incredible amount of time on a traditionally labour-intensive review process.

A Win-Win Situation: How Law Firms and Clients Both Benefit with Luminance

During the discussion, Jason identified two key benefits that Luminance delivered for the CRS team: resource and cost savings. Despite having only four lawyers dedicated to the project, Jason estimated that he would have needed the manpower of at least 30 lawyers to tackle the review manually!

Another key take-away was that Luminance enables lawyers to apply the skills they developed in law school, namely analytical and creative thinking. Since the platform expedites the document review process, the legal team can focus instead on applying their own analysis to the findings. As Luminance’s CEO, Eleanor Weaver, told the crowd: ‘Human and AI combined is far more beneficial. We are talking about augmenting the lawyer, not replacing them’.

While it is often assumed that it is law firms who are set to gain the most from using legal technology, it is important to remember that the ultimate beneficiary is always the client. Holly offered the Legal Geek audience an invaluable client perspective, noting that Farfetch benefitted from the knowledge that the specialist review had been conducted quickly and comprehensively by Luminance, capturing the ‘unknown unknowns’ that could been missed during manual review and potentially placing the company at risk.

Embracing AI for the Future

Luminance’s fascinating discussion with CRS and Farfetch at Legal Geek gave a real insight into how the legal industry is now recognising that technology is an indispensable tool in the digital age.

If you would like to request the recording of Luminance’s discussion with CRS and Farfetch, please email us at [email protected]