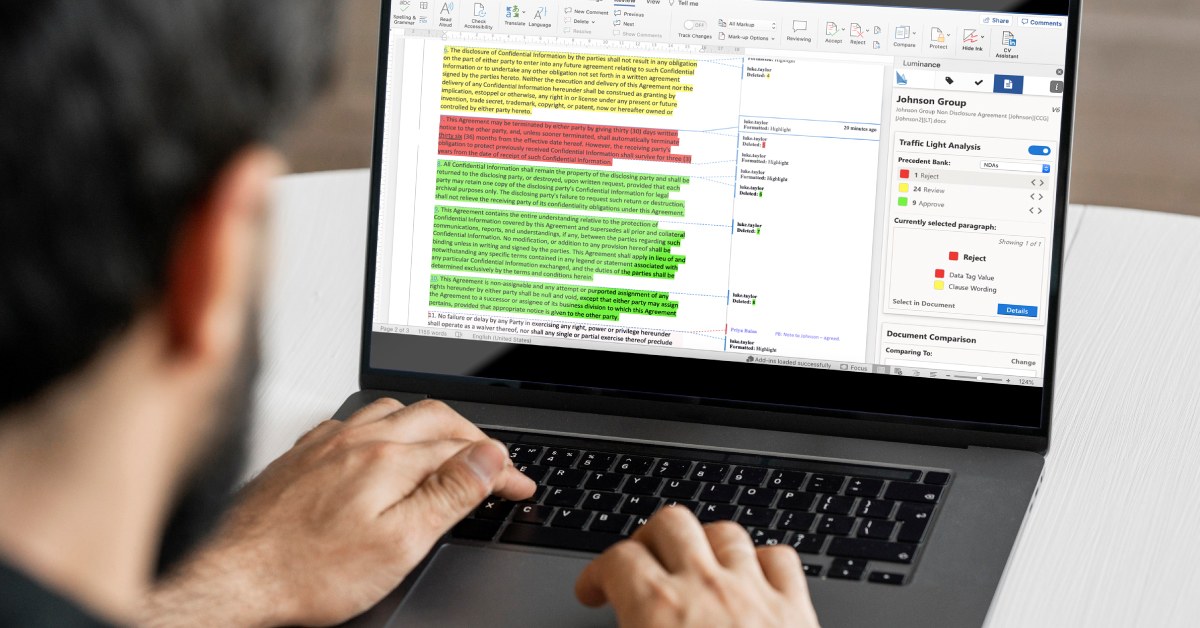 Critical to any functioning business, contract management can nevertheless be a drain on resources. It no longer needs to be. With AI technology, lawyers are equipped with every tool they need to make contract management quicker and easier, from initial drafting to negotiation and execution. Luminance Corporate, our latest cutting-edge, AI-powered technology, has two parts. First, the Microsoft Word plugin which enables faster negotiation prior to execution. Second, the smart contract index allows for rapid answers to urgent business questions, and provides a granular understanding of all executed contracts across the company. Combined, these tools help General Counsel and their legal teams not just instantly and intuitively understand the level of overall compliance within their existing contractual landscape, but also ensure faster, stronger compliance in the future.

Traffic Light Analysis: A Visual Representation of the State of Negotiation

Luminance’s revolutionary Traffic Light Analysis is accessed via a Microsoft Word plugin. It may sound simple, but this tiny button has great power: it brings the full power of our AI systems to Microsoft Word, a key program for any legal professional. Users can open a document from anywhere – email, document repository, Luminance itself – and Luminance’s AI understanding of the contract will automatically appear, ready to transform their daily workflow. From there, Luminance takes a first pass at reviewing the incoming contract – without the lawyer doing anything more strenuous than clicking that plugin button. First, the platform visually indicates which clauses in a given contract are acceptable (green), worth reviewing (amber) or non-compliant (red). In this way, Luminance AI’s out-of-the-box understanding of contracts indicates any potentially non-compliant language, helping the lawyer instantly understand the state of the negotiation and focus their review accordingly. The highlighting is even able to pick out individual words that require review within otherwise compliant clauses. For example, within a contract’s termination clause, Luminance might greenline the entire clause, but also identify the number (of months/years) that it considers unusual, flagging in red anything unusual when set against your company’s existing approved contractual language. Whenever it red-flags a given clause or certain wording, Luminance suggests alternative compliant wording using that contract index we mentioned earlier, which users can then instantly insert into the document.

And remember: while Luminance automatically flags non-compliant language and provides alternative suggestions, no change is made to any contract Luminance interacts with unless the user makes that change. Luminance therefore learns more about you and your organisation over time, as it refines its understanding of what is and isn’t acceptable based on your own contracts, precedents and the way you approve or reject clauses and language during negotiations.

You’ve heard us say this before, but it bears repeating: Luminance’s ability to automatically read and form an understanding of an entire dataset instantly puts powerful insights into lawyers’ hands. At the point of ingestion, Luminance creates an intuitive index of an organisation’s contracts and can build up an understanding of which language is compliant within that index, and which isn’t. Armed with knowledge of any anomalies or other points of interest in both their own documents and those of their counterparty, lawyers can more quickly draft and negotiate compliant, competitive contracts. And as we’ve already explored, Luminance Corporate plugs straight into Microsoft Word, making this process even smoother by placing the power of our AI platform directly into the complex workflows that lawyers work with every day. The speed and ease of use of the plugin helps lawyers gain the upper hand in a negotiation and carve out a sustained advantage against competitors over time.

In the past, redlining non-compliant clauses required painstaking manual review, shackling in-house lawyers to repetitive manual tasks and preventing resource from servicing more valuable work. What’s more, tracked changes are a blunt instrument at the best of times: often, counterparties may not even use them at every stage of a negotiation, rendering effective version control a virtual impossibility. Luminance Corporate shows users exactly how each clause has changed over the course of a negotiation, regardless of whether tracked changes were turned on – all presented with one click in the intuitive Microsoft Word sidebar. Luminance therefore not only allows GCs and in-house teams to conduct faster negotiations, but also more confident ones, as the level and quality of information the platform provides allows them to be sure that nothing has been missed.

One major challenge for in-house legal teams is access to institutional knowledge. Valuable – and expensive – senior lawyers are often forced to check the work of junior lawyers or advise them on a clause-by-clause basis, reducing the time they have to do their own work. From easier access to rationale for different negotiating tactics, to faster adoption of compliance guidelines, and even stronger understanding of favourable or unfavourable times to make a deal, Luminance takes knowledge that used to be siloed in people’s brains and illustrates it directly within Microsoft Word. This creates an environment of accessible information that grows over time. In this way, the platform can empower entire legal teams, from new recruits who have a bank of company knowledge at their fingertips, to General Counsel who are freed to answer key business questions and ultimately drive growth of their company.