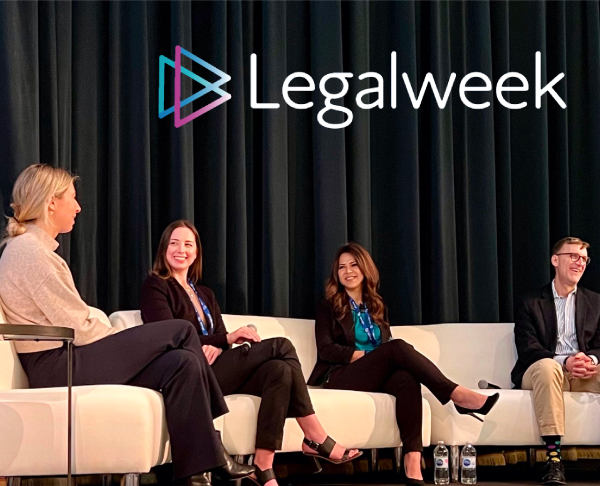 My Experiences at Legalweek 2022

Last week the Big Apple played host to Legalweek 2022. It was fantastic to be back across the pond and discussing some of the key developments which have occurred over the past year as well as exciting new developments within the industry.

I was thrilled to be joined by leading industry figures, Matthew Forsyth, VP and Deputy General Counsel at IDEXX Laboratories, Inc., Jackie O’Neill, Director of Project Management, Global Risk at Liberty Mutual, and Jordan Galvin, Global Legal Innovation Supervisor at Mayer Brown, for a conversation on how law firms and organisations can use AI to drive profitability, maintain compliance and gain a competitive advantage in negotiations.

Jordan from Mayer Brown opened the conversation by discussing the changes she has noticed over the last few years in terms of the expectations of new associates upon joining her firm. She commented “when new associates join, they sort of look around and think: what technology do you have available to me? It is almost like they're coming in with an expectation that we will be able to do things; to be able to cooperate electronically”.

This has gone hand-in-hand with the increasing automation of tasks. Matt from IDEXX described how digitalisation was a key differentiating factor which helped to facilitate a commercial advantage for his organization. As he put it, “if we’d had a paper-based legal team two and a half years ago, we would have been crippled.”

The Drive for Efficiency

Perhaps the most prevalent topic in the discussion was the drive for efficiency. All three panellists weighed in with their thoughts on how lawyers’ precious time can be better utilised by adopting advanced technologies such as AI.

During the discussion, Jordan from Mayer Brown noted that, “one thing that is great about technology is being able to give lawyers some of that time back and allowing them to focus on those parts of their practice that are really meaningful to them”. Jackie agreed and spoke about Luminance in particular, noting the power of AI’s ability to form a rapid comprehension of documents which had enabled the (smaller) Latin American branches of Liberty Mutual to take on more work than previously deemed possible. Which has in turn has allowed them to execute on their expansion strategies.

Matt agreed that the business case for AI at IDEXX Laboratories was the same: “We need to couple lean processes with data that enables people who are making decisions to make those decisions in real time, to understand them and have enough access to data that makes those informed decisions.”

Jackie and Matt agreed that the key time saving feature had been the contract modelling, which has enabled attorneys to see exactly how similar contracts has been handled before, spotting exceptions and maintaining compliance with all future contracts to a model contract. As Jackie put it, “Of course, no contract is perfect, but technically, you could create one that's close to perfect and you can compare every single clause of every single contract. For us, this saves an incredible amount of time. So that's where our biggest efficiency gain is coming from at this point.”

In the current climate, technology that facilitates time savings and generates a competitive edge is crucial. In fact, over the last few years, the changes have been such that new lawyers joining law firms or organisations take the access to technology as a given. To them, this is key as without this they will be the ones taking the brunt of document review work. Less time spent on manual document review means more time can be spent on analysis and advice and, ultimately, this is where the future of the legal practice lies.