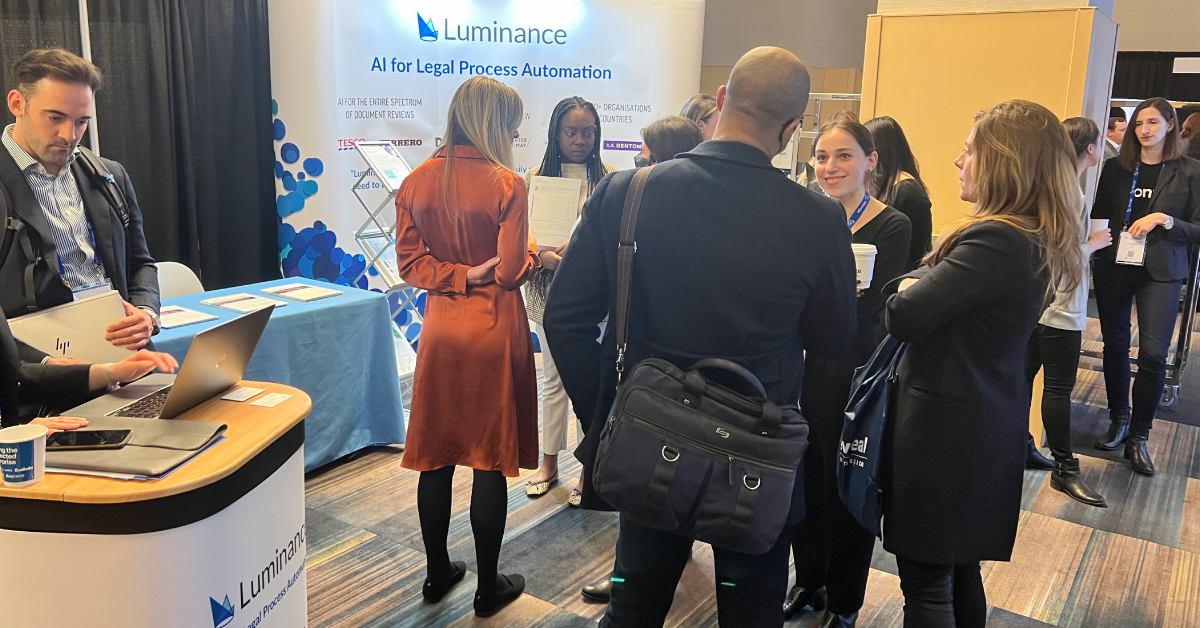 Last month, Luminance was delighted to be back in NYC for this year’s flagship Legalweek 2022 conference.

The discussion centred around how organisations in the US and around the world are using AI to drive profitability, maintain compliance and gain a competitive advantage. In case you missed it, here are some key takeaways from the panel.

i. Coping with Regulatory Change

In light of current geopolitical changes, many companies have found themselves having to quickly and efficiently assess their contracts to understand their level of exposure. IDEXX’s Matt described how, with an urgent and unexpected review of this kind, using a traditional Contract Lifecycle Management solution results in only ~50% accuracy due to contract metadata (which these more basic systems rely on) not being comprehensive enough, whilst the process would have taken weeks. However, using Luminance, IDEXX found they were able to get through large numbers of contracts to identify those that required further attention in just 20 minutes, giving Matt and his team a high degree of confidence that any relevant contracts had been identified.

ii. The Drive to Deliver a Better Client Service

Another key theme that emerged from this year’s panel was the ability for technology like Luminance to facilitate the delivery of a better service to law firms’ clients. In particular, Jordan discussed how the key selling point of Luminance at Mayer Brown is the time savings and the efficiency that the AI-powered tool delivers. She went on to explain: “When an M&A matter comes in on a fixed fee, my legal manager will let me know and we work together to get the team immediately set up with Luminance. This means they have a more accurate turnaround time and better pricing for the client. This has also helps to save money.”

iii. The Value of AI in Negotiations

Luminance’s latest addition to the suite of AI-powered products, Luminance Corporate, was also a hot topic during the panel. Luminance Corporate, which is the first AI in the world to be able to take a first pass review of an incoming contract, has allowed Matt’s team at IDEXX (which includes contract negotiators, lawyers, paraprofessionals, procurement team members and others) to get a holistic view of digital paper that can be anywhere between 2 and 2000 pages long. This in turn has allowed them to focus much more quickly on those contentious areas where they need to apply their sophisticated legal skills, to draft and negotiate. Amongst in-house legal teams where efficiency is key, Matt went on to explain that Luminance Corporate has been transformative.

Furthermore, Matt highlighted that one of the key benefits of Luminance Corporate is its functionality within Word. This has meant that lawyers are able to work with the tools they are already most comfortable with.

iv. The Need for a Language Agnostic Technology

Liberty Mutual Director, Jackie, also focused in on the benefits of Luminance’s language agnosticism. She explained: “We can upload all of our documents in Spanish and I can tell you exactly how much value that gives to our team in South America because all their documents are in Spanish, so training AI in the language that you need to use it in everyday is really valuable for us. It’s a gamechanger. Because you get to train the AI in your language, and you get to create a tag and generate all this data and analytics – that makes a difference. For us, that really has been the most invaluable feature.”

v. Giving You Confidence in Your Review

Jackie also pointed out the importance of technology that builds learning and confidence amongst the Liberty Mutual team, explaining: “We are actually empowering people and building their confidence that they are doing the work and they are doing it right the first time.” The ability of Luminance to read and understand any volume of documentation and highlight key information instantly has meant that Liberty Mutual have been able to rely much less on outside counsel to review documents and, in turn, have built the confidence of the team and the process they have now developed.